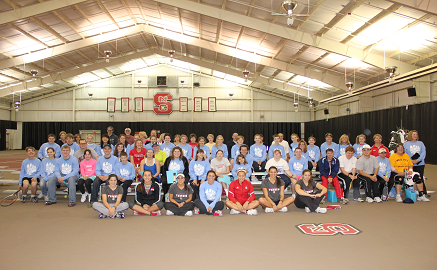 It is that time of year to come and gather with old friends and new for our 6th annual Winter Chill at NC State. This year we have so many fun things in store.. From great tennis, good food, collecting socks for the soldiers in Afghanistan through the USTA “Adopt a Unit”, to playing tennis with the NC State Women’s Tennis Team. Be prepared to have fun.

It is that time of year to come and gather with old friends and new friends for our 6th annual Winter Chill at NC State. This year we have so many fun things in store for you. From great tennis, good food, collecting socks for the soldiers in Afghanistan through the USTA “Adopt a Unit” like we did last year to playing tennis with the NC State Women’s Tennis Team. Be prepared to have fun.

Our six teenagers Marissa, Emily, Madi, Cassie, Emma and Chris have been meeting to plan a wonderful fun time together. The NC State girls are again very excited to be a part of the Winter Chill and they are already planning the dance. So come and join in, register now under NC Tournaments–6th annual Winter Chill. Invite your friends and family and we will see you in Raleigh on December 7th.

Food: Lunch and dinner will be served The ATANC is partering with Special Olympics Charlotte and the Charlotte Tennis Association to host the 3rd Annual Charlotte Challenge Tournament. This event is being held at the Jeff Adams Tennis Center in Charlotte on Saturday September 28th, 2013. There will be skills, short court singles, full court singles and unified dobules.

This is the 3rd year Charlotte has hosted an adaptive tennis tournament. We are hoping athletes from across the state of NC and athletes from outside of NC will come and play tennis and make new friends. Jeff Adams Tennis Center is an amazing facility and we will have access to 11 courts throughout the day.

There is NO COST to attend the tournament. All you need to do is register here at the ATANC site by Monday September 23rd. Go to Events, NC Tournaments, 3rd Annual Charlotte Adaptive Challenge and click attending on the bottom of the page.

Abilities Tennis Association of North Carolina is the public service organization that supports tennis training and events for children and adults with intellectual disabilities across the state of North Caroline. ATANC is non-profit and is led by unpaid volunteers. Tennis is a lifetime sport and we want to offer programs that will allow our athletes to play year round.