Register to play at Cary Tennis Park during the new ATP50 Cary Tennis Championships! Volunteers and players, get more info and register here…

One of the highlights of my summer was attending the SPUD tennis tournament in Belton, SC.  On July 9th, my daughter and I headed south for 2 days of fun tennis and fellowship.    The small town of Belton is the ideal spot for this tournament with 3 locations for matches and the SC Tennis Hall of Fame across the street from the courts was the logical spot for our meals.  Many of the players were from SC and Georgia, with two athletes from NC, Kevin Olin and Justin Hunsucker.

The tournament was fashioned after USTA league matches with 4 teams playing each other throughout the weekend.  We played two matches on Friday and one Saturday morning with the awards banquet following at the Belton Tennis Center.  Each team had a colored t-shirt to identify them.  We had volunteers from all over SC, GA and NC playing as unified partners with the athletes.  Though it was toasty warm, everyone held up well and fun was had by all.

Also, this summer, Play Days are in action with the first one at Aston Park in Asheville.  It was nothing short of a miracle that we were able to play…it was the only dry hour and a half the entire day!  One of our participants had never played tennis and she was reticent to say the least!  I just received an email from her that she has the tennis bug and she has not missed a day of tennis since the Play Day!  Love it!  Our next Play Day will be in Wilmington on August 14th and then we will move to Johnston County and then Greensboro. 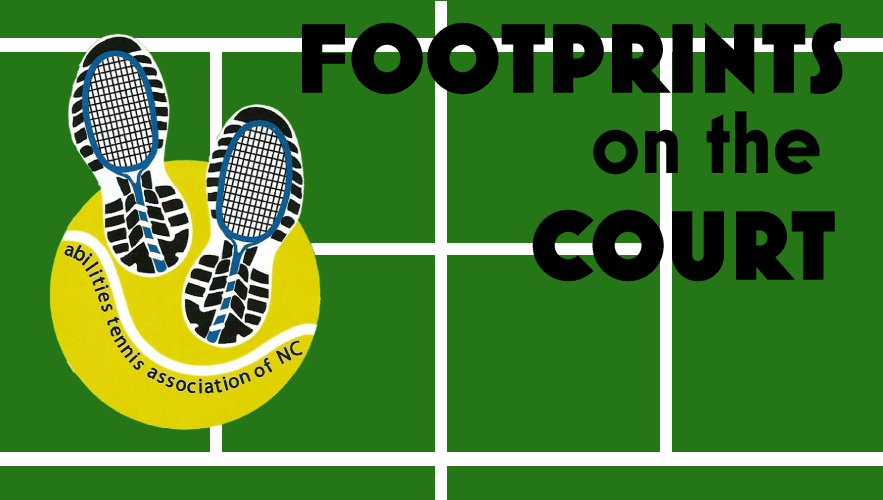 We’re still having a party! Come to North Hills Club to enjoy dinner from 6:00-8:00pm and Silent Auction. The band, 40-Love, starts the music at 7:30pm. The storm won’t stop our fun! Thanks so much for all your support.

Many clinic sites around North Carolina are open for registration, including many new locations!

Go to Programs -> Clinics to see a complete list of available clinic sites.

Good Afternoon!  This past weekend, May 14th – 16th,  we had a terrific time at the Winston Salem Adaptive Open!  We had athletes from all over the state and Boston, Mass convene at Vision Tennis Center in Clemmons NC.  Vision Tennis Center has 6 indoor courts they donate to the tournament.  They also donate lunches on Friday and Saturday and dinner Friday night.  Thursday evening was free play and we worked on setting up proper divisions.  Friday was a practice round for the” real” tournament on Saturday.  After completing singles, we played doubles and some athletes played unified doubles.  Friday evening after a delicious dinner from oSo Eats, we watched Night at the Museum.  Saturday evening after the tournament, many of the athletes and their families went to see Dash play, a minor league baseball game.

One of the highlights of the weekend was meeting Garret, a vivacious 9 year old boy who was experiencing his first competition in tennis.  There are some great pics on FB which show his enthusiasm!

Saturday afternoon we had an awards ceremony where every participant received a medal.  Many athletes had a few comments to make which included anything from expressing appreciation for the opportunity to compete to giving thanksgiving that no seizures had occurred in 6 months….this announcement brought cheers, hoots and hollers!

We had volunteers from the club and from the surrounding community.  We couldn’t do this event without our volunteers.  Thanks to Charles Hunsucker for organizing this group!  Also, a big thanks to the Boston group for making the trip down and raising the level of play!

It was a grand time and I think everyone is looking forward to next year!